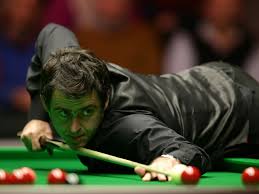 It’s the second round of snooker’s Welsh Open. And all eyes are on Ronnie O’Sullivan. After refusing a maximum the previous day, O’Sullivan has brought plenty of media and public attention to himself.

Steve Davis once said something like, that if he ever played a casual shot then he fully expected the snooker gods to show him their displeasure.  So how would the unseen powers respond to Ronnie’s 146? Would he be made to suffer with kicks, big bounces and runs of bad luck? All signs that the player and the game are not quite in flow.

Well the five time world champion brushed Tian Pengfei aside with an effortless display of break building and potting. If the purists were debating whether or not Ronnie has disrespected the game on Monday, his demolition of Pengfei suggests that the snooker gods had better things to concern themselves with.

When your at the top of your game in any sport, how you remain at the summit is perhaps the greatest challenge you face. Unless you push yourself to learn, develop and improve, then eventually a staleness creeps in and the chasing pack catch up with you.

On Monday against Barry Pinches, O’ Sullivan turned down a 147 on the grounds that the £10,000 prize didn’t place enough value on the maximum. But what he is really doing is challenging himself.  He knows that if he is close to the top of his game, only a few players can come near him. So in the absence of strong external challenges, the tests have to come from within.

Ronnie O’Sullivan has notched thirteen 147’s in his career. They don’t come along every day. So it’s understandable he places a high value on them. Having turned a certain maximum down on Monday in Cardiff, he knows the watching world will be paying attention. To see if he can rise to the challenge of securing his fourteenth career maximum. And that is exactly the level of focus O’ Sullivan needs to guarantee a champions edge.