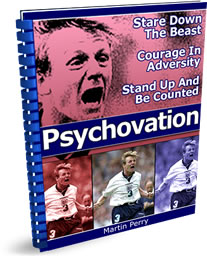 It’s one of the great unresolved riddles in world football. That is, the inability of England to win penalty shoot-outs in big international tournaments.

There are many interesting theories, psychological and scientific based resolutions being raised to overcome this problem. But there is one that rarely gets spoken about.

In 1990 Stuart Pearce famously missed from the spot, in the World Cup semi-final shoot out with Germany. It took six years before this passionate and proud Englishman, had a chance to put things right.

The Euro’96 quarter final with Spain went to pens. Manager Terry Venables gathered his players around him, and asked who wanted to take a pen. The first to raise his hand was Pearce. ‘I’m taking one!’, he declared, mad as hell according to Paul Gascoigne.

Pearce took the third penalty. It almost burst the back of the Spanish net, such was the pace, power and precision of his shot. And his subsequent celebration allowed him to exorcise all of his pent-up emotions.

Stuart Pearce showed how to handle the pressures of a shoot-out. He couldn’t live with the feeling of having let everyone down in 1990, and so faced that feeling head on. He stared down the beast of failure and won. This is pure attitude. An attitude of defiance.

His attitude was based on a belief in his own penalty taking ability. And a sheer bloody mindedness to not be perceived a choker. Because he knew that he wasn’t. He didn’t want to fail. But he wasnt scared of failure.

Can this attitude be coached? Of course it can! It means learning to draw on that feeling of defiance as a pen taker. That you will not allow the external pressure to negate the trust in your own skills. It’s a ‘xxxx you’ attitude towards failure. It’s about heart; bottle and the spirit of Stuart Pearce. This is Psychovation!