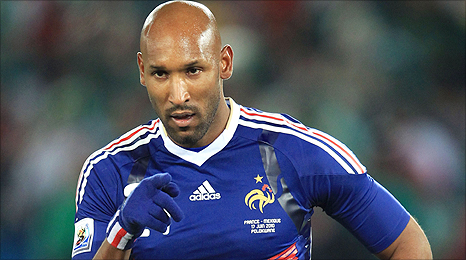 So after the fiasco of the failed World Cup campaign, the French Football Federation have come down hard on one of the main perpetrators of the French self-sabotage, by banning Nicolas Anelka for eighteen games.

This effectively means that Anelka will not represent his country again. But more importantly, it allows a critical re-evaluation to begin.

A re-evaluation around the core values of French football. Values which had clearly become forgotten, as weak man-management and rampant egos held sway, over what it meant to represent the French nation at football.

Sometimes it can be good to hit rock-bottom. Reach a place so low, that it is essential to re-focus hearts and minds. A place where the pain of failure, creates a determination to rise again.

The French were the laughing stock of world football in South Africa. But what if this nadir, was a critical turning point? A point of no-return that allowed a clearing of the slate. Meaning that all who wear the French shirt in the future, do so from a core motivation.

A core motivation of understanding what it means to represent the French nation. The peoples hopes, dreams and aspirations represented by the football team. In which the players are in service to the nation.

Brazil, under coach Walter Dunga, had a mission statement, that explained exactly who they are playing for. It was this: ’We came to rescue the self esteem of the Brazilian worker. Who wakes up in the morning and returns home at night. Whose only satisfaction in life, is seeing Brazil win a football match.’’

If France can return to the roots of who they are and why they do what they do, perhaps they can use the 2010 World Cup self-sabotage, as the spring-board to a glorious resurrection. But it will take time. Patience. Care. And a long-term view. But it can be done.