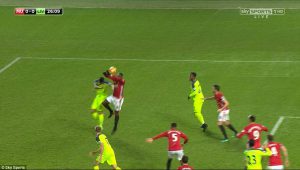 It;s Old Trafford. A damp January Sunday. A strong Liverpool team are in opposition. Everything is set up for a classic encounter.

So what better time for United’s Paul Pogba to introduce to the world his new Emoji. The United media team have backed their player by displaying news of the emoji on illuminated advertising around the ground as the game is in progress.

How unfortunate then that Pogba should have  a game to forget. A missed one on one opportunity. And then a shocking hand-ball to gift Liverpool a penalty.

When Bruce Springsteen arrived at the Hammersmith Odeon in 1975 for his first British show, he found that his record label CBS had left flyers on all the seats, asking ‘Is the world ready for Bruce Springsteen? ‘ Bruce spent the afternoon of the gig removing the flyers one by one from each seat. He knew he didn’t need that burden of expectancy on his creative shoulders.

Paul Pogba may well have felt the same yesterday afternoon. By allowing his name to be used in real-time pitch side advertising, he is drawing maximum attention to himself. He cant go about his work quietly…..unobtrusively. And with his name in lights, comes the sub-conscious need to back up his status with a performance to match. But instead it had the reverse effect.

His handball was the sign of a man who had no control over his actions. As if he was mentally lost somewhere between wanting to play his normal game. And having to back up the hype with a superstar performance. And he ended up in a fog of uncertainty, with his body behaving almost independently of his mind!

You could imagine Zlatan relishing his name being lit up pitch-side. He would feel it appropriate. But for Paul Pogba it was a step too far. He’s a very good team player. A contributor to the collective success. But he’s not above the team. And by his actions yesterday, he showed the word how uncomfortable he felt being made out to be someone he isnt!