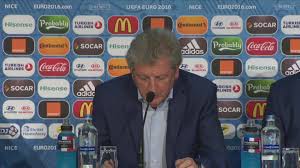 When England opened the scoring against Russia in their first group match of the Euros, it looked like the perfect opportunity to establish their tournament credentials, and put the weak opposition to the sword.

Just after Eric Dier’s goal went in, Roy Hodgson formed an unexpected huddle with his management team, Ray Lewington and Gary Neville. The reason…to create a defensive strategy to safeguard their lead. Of course it failed.

Why did the manager need to form a huddle with his management team? The game dynamics were clear. The Russians were there for the taking. Could he not see that? Consensual leadership is fine if unexpected problems need solving. But this wasn’t one of those moments.

Questions of what Roy Hodgson could and couldn’t see, emerged after his post Euro exit press-conference. As well as querying the need to meet the press, he was at a loss to understand England’s chronic Iceland under-performance. There are no ‘magic answers’ was his response to questions.

Hodgson’s inability to provide clarity was entirely in keeping with how England played. Sure. it’s the day after the game. And emotions are high. But one of a managers key skills is in being able to assess why his team has underperformed, If he can’t do that, then the same patterns repeat themselves. If he’s lost, you can be absolutely certain his players were.

The fog of England’s Iceland under-performance, was that of a team who had no faith in their managers strategy and leadership. This was a group who probably knew full well their strengths and weaknesses. But were being undermined by a manager who couldnt see, what to them was obvious.

And without strong in-house leadership to take ownership for the teams performance, they were subject to a collective lack of faith in their boss. Leading to lethargy, lack of focus and loss of basic skills when under pressure. They lost belief in him. And thus lost it in themselves.

Roy Hodgson was a man not equal to the strategic demands of international football. For someone so well read, he lacked the acumen essential at highest level. Instead of being able to rise above the performance fog that traditionally accompanies England on the world and international stage, he simply added to it with his sense of uncertainty.

And there is one thing a footballer can’t respond to…and that is a manager who doesn’t know his own mind. And last night Roy Hodgson’s unclarity became his players unclarity.