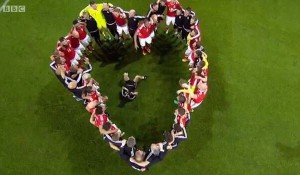 It was billed as the biggest game in Welsh football history. A team that had never been beyond the quarters of a major tournament. By implication that should have created a burden of pressure…expectation…hidden fears…(especially if you have been conditioned by England’s serial competition failures).

Instead you had a team that found a level of individual and collective performance. that more than matched the occasion. Much has been spoken of Wales’s team-spirit. A band of brothers. Everyone looking out for each other. The collective greater than anyone individual.

But last night another level appeared to be reached. Evidenced when Hal Robson-Kanu turned three Belgian defenders in the box with a Cruyff like turn to slot the second goal. Or when Sam Vokes scored his first competitive Wales goal for eight years, with a majestic header to seal victory. This wasn’t ordinary.

Its moments like this that players can find hard to explain publically. As if to do so would somehow break the spell. Or make it sound like you know what’s happening!

Being ‘in the zone’ is perhaps the closest known explanation. But even this feels too clumsy and commonplace. In these special moments, time often slows down for the player. They can see what is going to happen before it happens. Everything feels effortless.

It’s the game and the player becoming as one. Like an artist creating a piece of art they never knew they were capable of. It’s impossible to force or make this magic happen, It comes on it’s own accord, when everything feels right.

When Bill Shankly was manager of Liverpool, he described The Golden Triangle of the players; the football club; the people and the city… coming together as one thing in unity. The people can’t play. You are their representatives in the red shirt.

Not just team-spirit. More like a twelfth player. Where the collective is so tight that it feels there is an additional player in their ranks. This is the aggregated energy of the group. Like the group having a life of it’s own. When that happens, individuals do things they may never even realised they could do!

And so it was last night in Lille, that the players, the people and the country came together as one. And when such unity of purpose occurs, everything is possible,