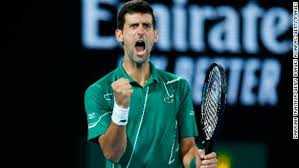 And so Novak Djokovic adds an eighth Australian Open title, to his collection of Grand Slam titles.

At times yesterday, during his five-setter with Dominic Thiem he looked on the rack. Exhausted. Heading for defeat. But you underestimate Djokovic at your peril.

He has a deep well of inner resources to draw on, that sustain him through on court difficulties. Resources forged during his childhood. That prepare him for adversity.

It’s not just an outright refusal to lose. It’s more than that. It’s the ability to change the game dynamics through an inner will. A reversal of polarities, akin to turning back the tide, through the power of the mind.

Can you teach this? Well you can certainly learn from it. Draw inspiration from it. Very few people have to endure the hardships Novak Djokovic did. But a powerful will is freely available to anyone who chooses to walk the path of success.

It begins with an attitude. An attitude that says, ‘I’m under pressure. Things are going against me. But I believe things can and will change. I don’t  yet know how. But I will find a way!’.

It’s like an inspirational message to self, that rallies the troops, keeps morale high, and energy levels bouyant. And importantly it wards off the underlying pessimism, that impending defeat can bring.

Note: See the Rumble In The Jungle for one of the finest sporting examples of this.1974. Kinshasa. Ali being hammered by Foreman’s brutal punching in Round One. Spends the moments between rounds with his eyes closed. Trying to find a plan to counter Foreman’s aggression. He succeeds.

Djokovic has this same spirit. The belief that within, beyond this moment in time, change will occur. Seventeen Grand Slams title comes from a special talent. And a will and spirit that nothing can break.