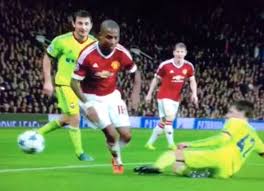 With the score at nil-nil. Young has sought to con the referee with an obvious dive in the box. It’s only brought him stinging criticism from ex-professionals, instead of the game changing penalty he sought.

The dive has been part of Young’s repetoire for a few years now. As if he has lost trust in his natural ability to beat a man in the box with quick feet or sharpness of thought. He resorts to cheating to do the right thing for his team.

Is Ashley Young still searching for that elusive naggng feeling that he truly belongs at Manchester United? That he is worthy of wearing the famous red shirt. That subtle self-doubts manifest themselves in approval-seeking dives?

Maybe somewhere along his United career line. Ashley Young lost the trust to freely to express himself as he did at Watford and Villa. And to compensate for that lack of trust, Young found another way to contribute for his team.

Despite being warned about it in the past, under pressure in a big Champions League night at Old Trafford, the old dark habit comes back into play. As if Young can’t help himself. He wants to contribute. He wants to be liked. He still needs to belong. And those nagging compelling needs have a stronger pull than upholding of the games higher values or trust in his skills.

At thirty years of age. Ashley Young still has the time to match the potential he showed early in his career, with consistent high level performances. To lift the crowd by leaving a defender on the seat of his pants. To set up goals with his quick feet. To play with freedom and a love of the game. If you want to belong, then give the faithful something special to remember you by. But don’t allow the demands of the professional game to de-genius you!