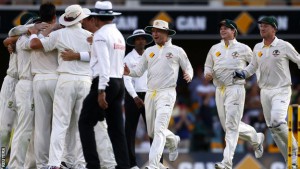 Sometime through the first Ashes test in Brisbane, it looked like little had changed. Stuart Broad, supremely focused and positively thriving on the uninhibited insults from the tetchy locals, was putting Australia to the sword.

The dominance England had established in the home series, looked set to continue. Then the game dynamic was turned upside down.

Brad Hadden and Mitchell Johnson dug in for a crucial partnership, and the Australian bowlers had a total to defend. Then the carnage began. Johnson’s pace and unforgiving hostility had England on the back foot and as wickets fell cheaply and tamely the hosts suddenly looked like a team again. As they sniffed out English weakness, their confidence soared.

The softer the English dismissals the more bullish Australia became. Energy, belief and certainty levels soared. England were simply unprepared for this suddenly upsurge in Australian intensity. The old dynamic of Australia dominating a weak England resurrected itself.

The visitors now have ten days to reset their focus. Reconnect to their hunger and desire. Find ways to combat the hostility. It will be a test of inner strength.

They have to match the Australians mentally. Not allow themselves to be bullied. Not seen to panic under pressure. They have been given a warning. The Australians won’t give the weaker batters a moments peace from now on. England will have to come back hard at them, to test the underbelly of that confidence.

Strength in adversity is required. It’s what champions do when they are down. They find a place deep inside, that refuses to countenance defeat. They tap into a will and power that will not yield. When everything looks lost, the champion finds the best of themselves. Away from home, against a resurgent Australian team, England have to draw on the great quality English quality of defiance. It will prove the ultimate test of this team.