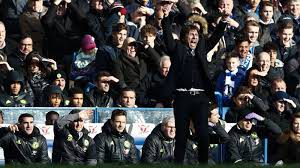 It’s every managers dream. Where your players have blind faith in you as a leader. They trust in you. They feed off your man-management and emotional energy. They will go the extra mile for you.

When the player – manager stars are aligned like this then everything is possible. And this is the dynamic that Antonio Conte has created at Stamford Bridge.

Questions were being asked after the three-nil drubbing at The Emirates earlier in the season. Who was running the Chelsea dressing room….the senior players…the owner? Either way the passionate Italian’s finger prints were not visible on his group.

Was Conte going to be strong enough to impose his will on an under-performing team? Would he mind who he upset to do so? Did he have absolute clarity about the style he wanted to play. And be prepared to do what it takes to achieve that?

The mark of a good leader is to recognise problems. And solve them. If he does that and it creates a turn-around in results, then players will start to show trust. The more problems that are solved, the greater the trust builds. He then starts to becomes a leader cynical ‘been there done it’ player are prepared to follow.

Thus the leader can ask his players virtually anything within reason, and they will comply. Because  they know it will lead to positive outcomes. And if any player isn’t on board the Conte train, the others will soon let him know that they are letting everyone down!

It’s a perfect scenario and in stark contrast to champions Leicester, where talk of the manager losing the dressing room indicate a breakdown of that trust.

Trust is like a mobile pipe-line, through which flows unlimited amounts of energy. It’s a flow that never seems to stop, because positive energy creates more positive energy. Trust isn’t half hearted, It’s all or nothing. Absolute.

Mix into that cocktail Conte’s high intensity emotional engagement, and you have a team running on the potent ingredients of trust and passion. Combine them together and you have an unshakeable belief. Thus the hallmark of champions!