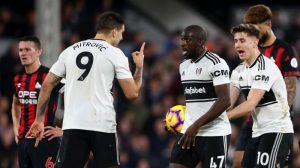 It’s one of the most unseemly sights in football. A penalty has been awarded. Instead of the designated penalty taker picking up the ball and walking calmly and confidently to the spot, a melee breaks out.

Another player has decided that he fancies it. And starts grabbing the ball off his team-mate. Players have to intervene to sort it out. But his will is so strong. He feels so certain. He has to have the ball.

This was exactly the scene at Craven Cottage yesterday, as Aboubakar Kamara undermined his manager Claudio Ranieri and team-mates.

In such a scenario, scoring is essential. A powerful pen that supports your desire to take it. But Kamara’s penalty is weak. Lacking both power and placement. Whatever intent he had in his mind when he demanded the ball off Alexandar Mitrovic, had drained away by the time he put the ball down.

But why do players do this? Why do they put their own needs before the teams? There is usually an unmet need driving them. A craving. An unspoken thirst to be important. To be seen to making a significant contribution. To be the man.

It’s not pre-meditated. The urge flares in the moment and won’t stop until it gets it’s way. Kamara’s penalty was probably so weak, because the craving had drained him of emotional energy. Like an act of self-sabotage.

Fortunately for him, Mitrovic’s last minute goal saved his considerable blushes. But if he is wise, Aboubakar Kamara will engage in a period of introspection. Learn about his own motivations. Unmet needs. Cravings. And other sub-conscious patterns that can undermine you.

Leading to becoming a more balanced, rounded player and individual. It’s a moment he will want to forget. But one that could yield him great learning. If he is prepared to look closer within himself.