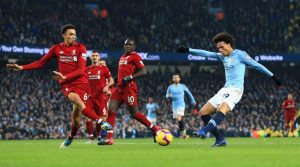 it’s the Thursday night Premier League showdown. And it’s Liverpool’s big opportunity to stretch their lead at the top of the table.

But to do so they have to overcome a Manchester City team who have no intention of lying down and handing over their title.

It’s a ferocious encounter with nothing left in the dressing room. But it’s City’s desire that wins through as they close the gap at the top. But this is no ordinary desire that City drew on. It had a special intensity to it.

Like everything was on the line. Everything mattered and had to be given to the cause. Full and total commitment.

Drawing from power deep within. That isn’t needed in most situations. It’s a power that you can call upon when an emergency or crisis is upon you. Or when something is so vitally important that a supreme focus is called for.

It’s Muhammed Ali and the Rumble In The Jungle. When in the presence of the greatest adversity, Ali had to found something in himself he may not have even tapped into before. It’s the sense of adversity that creates the desire, to find the power that more than equals the challenge.

And that is what City found last night. With their title on the line they found the power of champions. A potent mixture of belief; courage; desire; will; and urgency all combining.

It’s a lesson in recognising that within every team, or individual there is always more.  And the greater the challenge, the better the chance you have of finding that more. As City did so impressively last night.