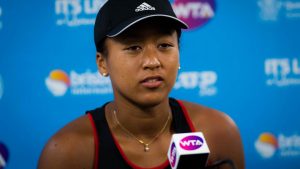 It’s the aftermath of Naomi Osaka’s Brisbane Open loss to Leisa Tsurenko. A poor performance from the US Open Champion, has led to some frank admissions in the press conference.

“I feel like I had the worst attitude today,” she said. “I feel like I didn’t really know how to cope with not playing well. I don’t know … I was sulking a little bit? There were moments when I tried not to do that, but then the ball wouldn’t go in and I would go back to being childish.

These aren’t the sort of public utterances you would normally hear from a Grand Slam Winner. Most players don’t talk so frankly and disarmingly about their own game.  Her candour is refreshing.

Speaking your truth allows you to face your reality. Instead of brushing over it. Or pretending it didn’t happen. It’s out there. In the full light of day. Exposed.

Not hiding in the shadows of your self. Brooding. Building up self-deceit that will prevent you from both seeing the truth about yourself. And prevent you from working out on court, what is going wrong on any given day.

Naomi’s frankness allows her to see exactly what is happening and what to do about it. She has taken ownership of her own behaviour. No blaming others. No passing on responsibility. No hiding behind excuses. It’s my problem. I know it. I recognise it.

Being US Champion gives you the increased confidence to be yourself. But maybe, it’s this quality of knowing innocence that allowed Naomi Osaka to become US Champion!