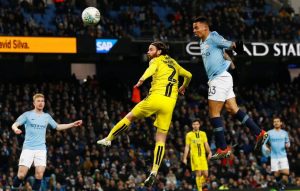 It’s the first leg of the Caraboa Cup semi final, and Manchester City are putting Burton Albion to the sword.

Four nil up at half time, the match and a place at Wembley is already secured. Time to rest a few players. Play at a slower tempo. Control the game with plenty to spare.

But Pep Guardiola is having none of that. If anything the intensity is greater in the second half. In a masterclass in Ruthlessness, City score a further five goals. But why? What’s the purpose to this demonstration of total superiority?

It appears as if Guardiola has used the tie, to groove into the system a high intensity game rhythm that will serve his team well in more challenging encounters yet to come. When titles and trophies are on the line, intensity is king.

Intensity is the bringing together of all the preparation, training, process, habits, disciplines, and tuning them to a high a level as is possible. So that the groove machine is in the fullest flow. Creating almost impossible to defend against football.

It calls for maximum levels of concentration, where the individual and collective focus is always ready for the next moment. Dropping of concentration is the biggest weakness of all in this superior system.

It’s very rare to see a team manage these high levels of intensity for ninety minutes. But by this demonstration of ruthlessness, City have prepared themselves for days ahead, when top English or opposition drop their guard and show weakness for a micro-second.

It’s the mindset of champions preparing to be champions ahead of time.