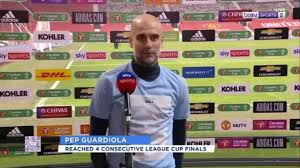 And so Manchester City are through to yet another Caraboa (League) Cup Final, after a two goal win at Old Trafford. Always a little bit sharper, quicker and tuned in than their local rivals, City had the benefit of a twelfth player.

The day before the game it was announced, that City legend and England international, Colin Bell had passed away. City had dedicated this performance to him.

The power of a cause can never be under-estimated. It reinforces the banks of emotional force and power.

It means that you are playing for more than just yourself and your team mates.

Your focus is on an invisible force that can’t play.

But you CAN play on their behalf. The more feeling you have for the cause, the greater the power.

It can help you run longer; faster; quicker. Fuelled by desire and motivation to NOT LET THE CAUSE DOWN.

Because you have committed to the cause, it now becomes your responsibility to give it everything.

Get it right and it will feel like there is a twelfth player on your side. The eleven of you plus the invisible force.

Causes have to feel real. Often managers create a false enemy to create an US v THEM cause. A sense of INJUSTICE . And this has worked over the years.

Last night at Old Trafford was a personal cause. On behalf of a player who engraved his name into club history.

Thus City were playing for HONOUR. Which is why they celebrated like they had won the trophy!

They had lived up to their promise to the invisible force. And so could be PROUD!