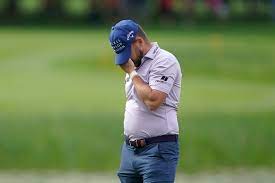 The British Masters title is up for grabs.

And Scotland’s Ritchie Ramsay has moved into prime position. He’s one ahead with the last to play.

He drives off safely. But then he dunks the approach shot in the water.

It’s a bogey six. His title chances are over. All because of one shot.

Closing out for a win is one of the hardest things in golf.

Now it comes down to this.

You don’t want to make a mistake.

You are trying to take extra care.

But maybe in doing so, you lose some of the freedom you’ve had to get you into a winning position.

The importance of the shot can overwrite the process.

Cause you to lose vital clarity.

Leading to a fractional loss of rhythm and timing.

The key to closing out. is in the pre shot routine.

It’s in the swing that things can get tight.

Take your time over the swing.

Know what you’re looking for.

Take that feeling over the ball.

The swing which has put you in contention is the swing that will secure you the title.

Richie Ramsay is probably having sleepless nights over the 18th at The Belfry.

But once he understands where and how his process broke down, he will be desperate to be in that situation again.

For learning is the greatest healer of sporting wounds there is.