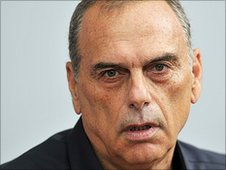 ‘This team carried a lot of psychological problems’. The words of West Ham United manager Avram Grant, after his teams edgy win over League Two’s Oxford United in the Carling Cup.

What is Avram talking about?

This is a team who, over the last year has forgotten how to win.
Therefore, the players expect things to go wrong. And they do!
There are not enough leaders in the team to overcome challenges.
West Ham United now tend to sign players from overseas.

Do these players speak good English? If not, are they given a timescale by which they have to?

Are these players given a thorough induction into the history and core values of West Ham United. If not, why not?

West Ham seemed to be a club drifting at present. Therefore, Avram’s first task must be to develop more leaders in his ranks. Players who will not accept the inevitable. Standard Setters.

Men who take responsibility for their actions. And who will pull others up by their boot straps, by demanding more from them.

When he has enough leaders, then a turn-around will begin. And confidence and belief will flow. But it wont be easy. For the acceptance of defeat and mediocrity, is a virus that can be hard to shake off. But it can be done with the right help.