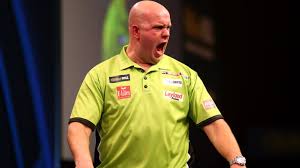 One seed who remains is defending champion Michael Van Gerwen. But it could have been so different. One set down and under the kosh to Jelle Klaasen, Van Gerwen had to find something to get him out of a hole.

Something which the other seeds couldn’t find. Something which is the preserve of champions. You could see it in his concentration. Mid-way through the second set with the pressure mounting, the champion turned on his mind. The fog, born out of trying too hard against his one time rival Klaasen, started to lift.

The anxiety went out of his throwing. Instead he found a rhythm and his scoring improved. The game dynamics changed within minutes and there was no way back for Klaasen.

This is what champions do. They know how to solve problems. Because in winning multiple titles, Van Gerwen has come across most of the challenges he is likely to face. Which means he knows the solution to those challenges.

By keeping calm and not panicking, he can access those solutions, and turn a game around quickly. He understand this instinctively.

It’s something Rob Cross wasn’t able to do in his first round loss to Kim Huybrechts. His throwing rhythm was out, but he coudn’t find a solution. In fact his game deteriorated as he tried too hard to fix the problem.

Van Gerwen made no such mistake. He switched on his concentration powers, so he was more tuned in to dart to target. Forgetting about Klaasen and concentrating on the one thing he had total control over. His throw.

When your a multiple champion, you build up a reserve of game intelligence, that gets you through tight situations. It’s one thing to have this intellligence. It’s another to be able to access it. But Van Gerwen knows that it’s in him. Thats why he can stay calm under pressure.

For in the secret world of champions, calmness is king!