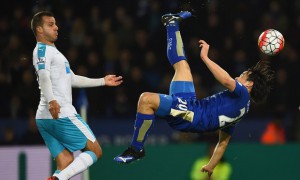 It’s five minutes from time at the King Power Stadium. Leicester City are holding a slender lead against Newcastle United. And the tension is palpable.

On the touchline, Claudio Ranieri is rousing players and fans for one final effort. It’s a scenario we may well see played out again before the curtain is drawn on this unusual Premier League season.

With eight games to go and a five point cushion, the Leicester title dream can now become a reality. And that is why Ranieri’s interjection was necessary last night. He needed to break the spell. Break the sense of nervousness that was feelable on and off the pitch. Nervousness has not got them to the top of the Premier League. And it won’t help them win the title.

Leicester’s strong team-spirit is one of the reasons they are succeeding. Each player working their socks off. Not wanting to let the other down. Watching each others backs,

But now they can smell the finishing line. And when you get close to achieving something special, a defensive psychology can hold sway, that causes you to not want to lose what you have gained.

Thus players not wanting to make a mistake that lets the others down. Not wanting to be the one that costs the Premier League title. Leading to cautious passing…reduced or mis-placed energy levels…tension in front of goal, as each goal-scoring opportunity becomes a chance for glory. It’s theirs to win. And it’s also theirs to lose.

Leicester City are in unchartered territory. There are no past memories or references that explain how to do this. They are inching their way forward into the unknown. But if the feeling that leads to a Premier League title is unknown, there are many knowns for them to draw on.

That’s why Ranieri’s intervention was important last night. For he sensed a mood…an influence…an atmosphere…that was alien to the spirit of vibrancy that has captivated the Premier League. And he sought to banish it. He can see what the players may not be able to see. And like a good leader, acted immediately.

As the pressure mounts in the comings weeks, it becomes his job to guide the team through the labyrinths of the unknown. Reminding them of why they are where they are. And remaining vigilant for those moments when the doubts manifest themselves.

They laughed when he was appointed. They said that he was past his sell by date. But now it could be his years of experience and understanding, that proves crucial in whether Leicester become Premier League champions or not.