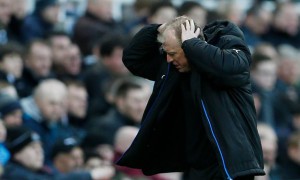 It was a so called must win game for Newcastle United. Taking points from the teams around them, vital in the quest for sustained Premier League football. So their limp home defeat to Bournemouth, does not augur well for the rest of the campaign.

Manager Steve McClaren came out afterwards to say that this was the most frustrating group of players he has ever worked with. Which won’t exactly get them back on side. It’s a frank admission from the under-pressure manager. And one that seems to direct the blame onto the players and away from himself.

It suggests that he is doing all in his powers to successfully prepare them. But somehow, because of their character deficiencies, they have minds of their own that betray his methods.

Observers of Derby County’s 2014-15 promotion run-in collapse will note familiar patterns at play.  Repeated uncorrected defensive mistakes, that make the team look like they have had no coaching in the basics of defending. Which is surprising given how positively ex-players speak of the quality of McClaren’s coaching.

But the pressures of coaching and managing are entirely different. Some managers can absorb and handle pressure well. Experience gives them know-how and trust in their methods. Seeing Neil Warnock demonstrating the benefit of his football years to Rotherham United is a good example.

But some can’t. The pressure manifests itself as worry and anxiety. You over think. Over-analyse. You reassure everyone that you are working hard on the training ground. But working hard does not always equate to working effectively.

The over-bearing worry prevents you from seeing things clearly. You can’t stop thinking. You can’t switch off. But rarely do you look inside for the answers. What if the problem is you?

Your management team aren’t going to tell you that. They are just following orders. But what if you really need to do a personal trace of your management career. Look at the repeat sackings. See that they haven’t happened by accident. That there is a significant flaw in your management methods, that is going to cost you your job. Again. Unless you change.

With so much turbulence going on around Steve McClaren, it will be easy to turn the focus outward onto his players, But that isn’t working. Within yourself, there is always a solution to be found. But to find those answers, you may have to uncover some uncomfortable truths. And with your job on the line, it may be the only option.

As writer Joyce Meyer said,’If your inner life is not producing what you would like on the outside, don’t be discouraged… just be willing to change’.