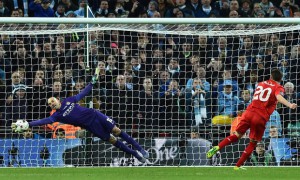 A few years ago, Sky made a TV documentary called ‘The Science Of Ronaldo’. One of the experiments conducted with the Real Madrid superstar, involved a player taking corners in a room containing a small set of goal posts. In front of the goals was Christiano Ronaldo. All he had to do was put the corner into the empty net. No defenders. No keeper. Easy stuff.

Apart from the fact, that when the corner was struck, the lights were turned off. Meaning that Christiano couldn’t actually see the ball. Didn’t stop him scoring every-time though!

With no visuals to guide him, Ronaldo was able to take his lead from the sound of the football being kicked. The ball sound informed him about speed and flight. When you play at a high level, your instincts only need to be fed a micro amount of critical information to know a great deal.

The Ronaldo experiment came to mind in the aftermath of yesterdays League Cup Final at Wembley. Manchester City’s Argentine goal-keeper Willy Caballero was being interviewed after his three penalty shoot-out save heroics. When asked by Sky’s David Craig the secret of his success, Caballero called it ‘instinct’.

In trying to save a penalty many keepers react to the wrong information. A takers body shape can suggest the ball must be going one way. The keeper sets off early in that direction, only to have the ball rolled past him into the opposite corner. The keeper has sold himself in thinking he must be ‘busy’.

The smart way is to stay still. Wait until the last possible moment. Ignore body shape. Ignore the penalty takers eyes. The critical information is in the foot-shape. The moment before the penalty is struck, the takers foot-shape reveals where they aim to put the ball.

So if the ball is struck anywhere except the far corners. or hit like  a thunderbolt, an athletic keeper has a chance of making a save,

At Wembley yesterday afternoon, Willy Caballero made a name for himself.  He sensed that in a penalty shoot-out, the penalty taker has more fear than the keeper. And he found a place within himself of no fear. He backed his goal-keeping agility against the uncertainty of a nervous penalty taker. In searching for the comfort of certainty, the Liverpool penalty takers gave away plenty of micro details to the City keeper.

In the Science of Willy Caballero, he honed in on the critical information that told him all he needed. For if you trust your instincts, the smallest of details opens the doors to everything you might need to know.