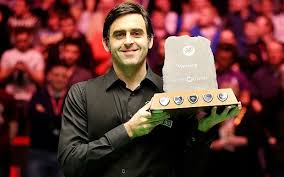 By winning the Welsh Open, he has secured his 28th ranking title. After an eight month break from the game, Ronnie O’Sullivan has subsequently not lost a match this season.

And apart from a tight opening game against Mark Williams at The Masters, and the early stages of this Welsh Open final, he hasn’t looked like losing one. Right now O’Sullivan’s game is at another level to his competition. With the World Championships only a few weeks away, there is every chance that he will add to his five Crucible titles.

Yet instead of talking up his chances in South Yorkshire, O’Sullivan is remarkably casual about his title challenge. “I’m not really bothered about Sheffield, I am not bothered about any tournament. I just treat it like a vacation and enjoy the time that I am away.” Sceptics may recommend not taking his comments at face value. As there may well be a burning competitive desire to hold the World Championship trophy aloft again.

But what if we ignore the sceptics. If what Ronnie is saying is true then he has attained a position that most sports professionals can only dream of. That is, you participate in your sports biggest events, unattached to your outcomes.

A lot of talented players are never able to fully express their talent, due to the external pressures of winning or losing. That subsequently lead to fear of failure; fear of success; fear of letting others down; beating yourself up when you under-perform…the list is endless!

After all any outcome is simply a manifestation of how you perform a whole range of individual tasks. But in sport, you are judged by what you have achieved, Until their recent FA Cup success, Arsene Wenger was constantly criticised for not bringing silverware to The Emirates. This despite his team playing a very attractive and entertaining brand of philosophy based football.

Removing the burden of winning and losing frees you up to play. Thus your mind, untroubled by scoreboard pre-occupations can become tuned into the games higher ideals. Touch…rhythm…flow…making the cue ball dance…angles…geometry…game control.

If Ronnie O’Sullivan is now indifferent to outcomes, then it is now surprise that he is unbeaten since his comeback. For a genius player without a care in the world, can play with a freedom that makes the game look easy. It’s not of course. What we are witnessing is a product of thirty plus years of work that has crystallised into mastership. It’s sport as art. And it transcends the magnetic pull of winning and losing!