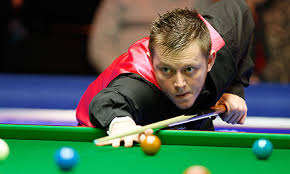 It’s the last eight of the Welsh Masters. And a big local crowd is in to see if Neath’s Michael White can make his first Welsh semi.

White will not be wanting to disappoint his fans. And the experienced pro that is Mark Allen is canny enough to recognise the pressure this will naturally bring.

Allen clears up in the second frame after White accidentally pots the pink. He celebrates his good fortune with a fist pump. It’s an act of positive aggression designed to wind White up. He was lucky to win the frame. Instead of respecting his good fortune, he’s intimating that it was his competitive instincts that have put him two-nil up.

It’s like waving a red rag to a bull. It’s a visible gesture. With White in his chair rueing his luck, the last thing he needs to see is Mark Allen celebrating!

Really all White needed to do was raise an eyebrow. Take a drink. And resolve to put the frame behind him as quickly as possible. After all he was still well in the match with seven frames left to play.

But Allen’s fist pump will have felt like an insult. Already feeling betrayed by lady luck, it was rubbing salt into the wound. Like Mark Allen saying ‘You were unlucky. And I like it!’ Celebrating injustice! He’s opening up Michael White’s emotions and stirring them with a spoon.

In front of his home crowd. Expectations high after putting out John Higgins. You can imagine the Welshman wanting to channel his emotional energy into positive attacking snooker. But Allen has got in first. Deliberately re-directing Michael White’s emotions.

And snooker is not a game that requires a high degree of emotion. Sure it’s ok to get a little angry. But it has to be smartly directed into your focus. Into the commitment to your shots. Into a desire to take the game initiative via positive intent. Chanelled anger can be very useful fuel. But unchanelled anger is self-destructive.

With White’s emotional energy all over the place, Allen cruises to a five frames victory. He’s played good snooker. But really this is a victory for experience. A player who has recognised his opponent’s potential weakness. And played on it. Ruthlessly.

It’s been at tough night at the University of Snooker for Michael White. And one he shouldn’t forget in a hurry. For the pain of losing so badly in front of his home crowd, can act as a trigger to help him recognise how over-reactive emotions can derail a cool snooker mind, And your emotions rarely help you solve snooker problems!