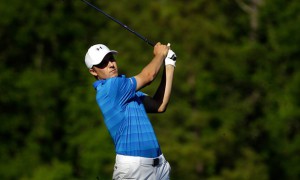 It’s Sunday at the Augusta National. And defending Masters champion Jordan Speith is in dominant mood. A run of four birdies has left him seven under par after nine.

Despite a couple of subsequent dropped shots, by the time he reaches the par-three ‘Golden Bell’ twelfth, he looks likely to retain the green jacket.

His tee shot off twelve goes directly into Raes Creek, that protects the narrow green, It’s ok. It’s a recoverable situation for a mentally strong player like Speith. Then he betrays his clouded mindset by striking his penalty-shot wedge straight back into the water. He still appears to be in shock whilst conducting the post-round interviews some time later.

Every amateur golfer will appreciate exactly what Jordan Speith has just experienced. When you are playing with confidence and a sense of certainty, it’s simply ball to target. You are aware of the water, but not magnetised by it. Your focus is on where you want the ball to go, rather than not go.

But if doubt enters your game, or elements of caution and negativity, then you stand on the tee, and think ‘ Don’t put it in the water!’. The hazard takes on an increased significance, because your fear of going in it, increases your desire to avoid it! And when you are leading The Masters and have just dropped a couple of shots, then defensive thinking can hold sway.

That defensive thinking cautions you to avoid trouble. It can mean that you place greater importance on the trouble than committing to your actual target. Resulting in an uncertain mindset as you address the ball.

It wasn’t Jordan Speith’s first shot into Rae’s Creek that cost him The Masters. It was his second. For he played it without having re-set his focus. As if a sudden attack of self-doubt had overcome him, that was so strong, he could neither identify it, or shake it off. That’s why he was still in shock some time later.

The pressure of leading the Masters + hints of self-doubt + Cautious Thinking all created a cocktail that led to his minor melt-down. Remember – this was the first time he had ever made anything worse than a double bogey in a major since he turned professional.

Anyone who has ever experienced self-sabotage will recognise the feeling. It’s like you no longer feel like you. As if all the negative emotions within you have combined together in a potent cocktail, to undermine what it is you are trying to do. You don’t feel yourself. But you just don’t know why. And you certainly don’t know what to do about it.

Being a champion isn’t just about the highs. It’s about being able to accept the downtimes, and come back stronger having learnt and understood from them. On Sunday at Augusta, Jordan Speith had a big lesson from one of the toughest courses in the world. It may have been uncomfortable, But chances are he will come back even better prepared for the unexpected!