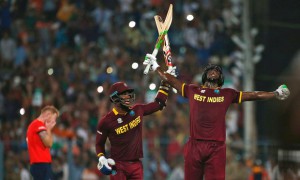 It’s the post-match interviews after a dramatic finish to the World T20 Final. And West Indies captain Darren Sammy is in bullish mood. He’s taking aim at a number of targets.

One of whom is former player turned commentator Mark Nicholas, whose derogatory comments about the West Indies having ‘no brains’, have apparently acted as a trigger for their cup winning performance.

There’s is nothing more satisfying for a team or an individual than to prove a point. It’s like someone has invaded your secret world with their casual outsider judgement and criticism. And if you have any kind of professional pride, you want to banish that influence directly. like a night club bouncer removing a disrespectful incoherent drunk.

Basketball legend Michael Jordan used to deliberately go out of his way to try and get an opponent to disrespect him. That way he had an artifical enemy to ignite his focus and trigger him to do his best work.

Being disrespected can often be a perfect catalyst for a team. It shakes them out of their comfort zone. They have to draw on all their strengths and desire to ensure that the invasive influence of disrespect is rejected. Failure to do so means that what was said about them remains true, until they have proved it to be otherwise.

Ben Stokes ran in to ball the final over at Eden Gardens, knowing that the West Indies required nineteen runs to win. He had every reason to think the odds were in his favour. What he hadn’t reckoned with was the unseen power that was driving the opposition forward.

Being told you aren’t good enough can sometimes work the other way of course. A weak team believe it to be true! But when you are the reigning T20 Champions, it’s an insult that is only going to trigger the belief and confidence, that was established in the winning 2012 campaign.

The West Indies can take great pride in what they did on Sunday. But they can take even greater pride in their ability to respond so fully to being doubted. For in the presence of confidence, doubt cannot exist!