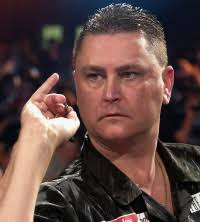 It’s the first round of the World Matchplay at The Winter Gardens, Blackpool. And World Champion Adrian Lewis is under-performing. Kevin Painter has three darts at double-top to defeat the man from Stoke. But he misses.

In a titanic struggle Lewis eventually finds his form and rhythm, and eventually overcomes Painter 12-10 to progress to Round Two.

In his post-match interview with Sky Sports Rob Stubbs, Painter bemoans his fate, repeating that he doesn’t seem to get the ‘luck’ that other players get. He is implying that he is ‘unlucky’.

This is not the mindset of a winner and champion. Painter is a very naturally talented player. But if he feels that he is ‘unlucky’, then he will never maximise that talent, and finally win a major TV event.

There is a reason that Painter missed three darts at double top. And it’s not a question of luck. To close out a tense game, requires clarity of mind; bottle; fearlessness; and commitment to your target.

You can’t ‘hope’ the darts go in. You have to totally commit to your target.

It’s noticeable that you don’t hear Phil Taylor call himself ‘unlucky’. He knows that any defeat lies in his own hands. Not the external factor of luck.

If you believe that you are ‘unlucky’, then you won’t win through in critical game-turning moments. For to do so, would be to overturn your own view of yourself. And maintaining an ‘unlucky’ self-view confirms your philosophy that the world is somehow unjust. Or that others players get luck and you don’t.

If Kevin Painter recognises this subtle flaw in his personal psychology, he may be able to kick-on and maximise his talent. If he doesn’t, then he will remain one of darts nearly-men.