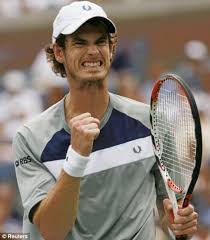 So Andy Murray’s quest for that first elusive Grand Slam continues. A very winnable third round encounter at Flushing Meadows with Stanislas Wawrinka ends in defeat.

Murray looks both frustrated and bemused at his press conference. Frustrated in defeat, but bemused as to why his game has let him down, when he needed it the most.

With each defeat, Murrays ability to claim a Grand Slam diminshes. For he becomes ‘beatable’. That is, his opponents know that if they proble long and hard enough, they will find chinks in his armour.

Either technical chinks, or mental ones. And the mental ones are self-imposed. Its as if Murray, in the midst of a mid-match crisis, loses sight of his path to victory. The clear images, that create the strategy and thus fuel the belief of how to win.

Murray has to learn how to stay in ‘the zone’. And understand what thoughts and moods cause him to slip out of it. Perhaps in his on-court match analysis, he fails to think clearly under pressure, or worries too much? Or even doubts himself, or beats himself up because of his high expectations.

Either way unless Murray resolves this dilemma, then he will never win a Grand Slam. For while he may have the technical ability, he does not yet have the mental abilities of a champion!