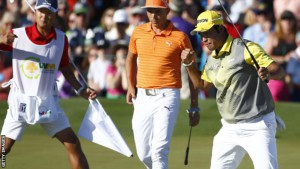 It’s The Phoenix Open, Arizona. America’s Ricky Fowler is in a two-man play-off with Japan’s Hideki Matsuyama. It’s the fourth extra hole. The 317 yard par four 17th. And the American is aiming to avoid past Scottsdale mistakes.

On eight previous occasions he has found water on the seventeenth. Unfortunately, history repeats itself. Fowler is in the hazard again. and Matsuyama wins the play-off and his second PGA tour event.

Fowler’s family have been in the galleries. Including his father and grandfather. They have never seen Ricky win. In his post round media centre interviews, Fowler breaks down in tears at the thought. It’s an unusual response from a successful professional.

Wanting to win for your family is a powerful driver for sportsmen and women at all levels. As is not wanting to let them down. Or not wanting to disappoint them.

The parents have often put their own lives on hold to support the talent. And the young person, sensitive to those sacrifices, wants to win so much to make the parents feel proud. Make them feel the sacrifices were worth it.

Of course the loving parent simply wants the talent to be happy. They dont want to feel the talent is experiencing emotional pressure to not want to let them down. But they often do.

It’s almost as if that family dynamic triggers the little boy or girl in you. The small person dependent upon the the grown-ups. You don’t quite feel yourself. As if you have lost independence of thought and action.

It’s that independence of thought and action that has helped Fowler secure six professional wins, Helped him develop strategies that created clarity of thought under pressure.,

But under the cosh at Scottsdale, Fowler lost some of that precious gold dust.  His winners mind blurred by the emotional contradictions of wanting to find a way to win, Yet wanting desperately for his father and grandfather to see him win. In thinking about them, he forgot about the most important thing – the how to win.

When the want to win is stronger than the how to win, those powerful emotions can distort clarity and simplicity of thought. And in golf, if you lose that clarity, the more you want it the worse it gets!