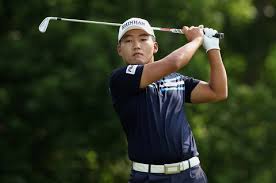 A course record sixty has given him a share of the clubhouse lead at the halfway stage. That’s nine birdies and an eagle from the world’s number three hundred and six!

Lots of players have rounds that begin in spectacular fashion. Runs of early birdies can feel good. Exhilarating even. But they can also make you feel uncomfortable. Players can get freaked out by sequences of birdies. It doesn’t feel normal.

It can throw you. Like you have been taken out of your normal scoring patterns. You may need a  bogey or two to normalise your feelings.

Golf can be a struggle. So when these special days come along, they can feel different to the norm. Where is the difficulty? Why does it feel so easy? There must be a problem waiting around the corner for me! These limiting psychologies can often kick in when the birdies are starting to flow.

But when its on, you have to dance with the golfing gods.  Like your playing in golfs higher stratosphere. Breathing rarefied air.

Everything starts to feel effortless. You are seeing your drives soaring through the air like a bird. The line of your putts is lit up and illuminated like Blackpool illuminations.

The course feels like it is revealing it’s secrets to you. Showing you the path to the hole. It’s almost extra-dimensional. Like it has come alive. Speaking to you. Guiding you.

Because it’s not normal, you may find your self resisting the golf course’s advances. In which case, you have to gently let go of that part of you, that wants and needs to be in control.

But if you can reserve a part of yourself for the unknown…for the sweet mystery of golf to be part of your world…then these special days…these special moments are possible…as Sung Kang discovered one February afternoon on the Californian coast.

For as Michael Murphy says in his book Golf In The Kingdom…“I can think of no better way to say it—those final holes played me.”