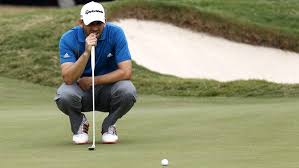 It’s the start of the European Tour season. Spaniard Sergio Garcia starting promisingly with a seventh place finish in the Qatar Masters.

Garcia, as always, strong from tee to green. But an average of 31.5 putts per round. And by the final round, more experiments with his putting grip. Abandoning the claw technique of recent seasons, to go back to a more traditional method.

Change of putter. Change of grip. It all seems logical to a player seeking excellence. Seeking his first Major at the age of thirty-six. But after so many changes. maybe the answer lies elsewhere. Lies in something more obvious.

For most top golfers, there is not an issue with their putter or their putting technique. The problem lies in how they read a putt. A player who doesn’t feel they are confident with their putter, often arrives on the green to survey their putt, with their mind already busy. Already fretting about the putt. Uphill – musnt leave it short. Downhil – don’t go past.

This mental busyness prevents a clear, relaxed mind. Prevents them from seeing and reading the putt with soft eyes. Prevents the putt from speaking to the player.

When a player is relaxed and in tune with the greens, the putt reveals itself to them. The line illuminated as if lit up by white or coloured lights. The path from ball to hole clearly visible.

This clarity means that when the player stands over the ball, they know the ball is going in the hole. They just do. Everything is so clear. You can’t miss.

When you lose that clarity, you think it must be your technique. Must the be the putter. It sometimes is. But not often. Once the putts start speaking to you, you will feel that can putt with anything. But for it to speak to you, you must be quiet. Calm. And sensing!

Sergio Garcia still has time on his side to secure that first Major. But to do so he has to putt well. And to putt well, he has to perhaps, put aside the notion that the solution lies in his putter. Or his grip. Start seeing the putt. And the rest will follow!