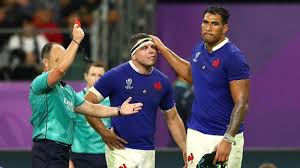 And so Wales make it through to the World cup semi-final. Theres was a tough battle -hardened performance. Helped in no small measure by the sending off of French lock Sebastien Vahaamahina.

The Frenchman’s brutal elbow on Aaron Wainwright probably cost his team the game. An unexpected act of madness in a quarter-final demanding discipline and clarity of mind and emotions.

But the red mist doesn’t work like that. It has it’s own operating conditions. It’s impulsive and highly reactive. Like an act of self-sabotage. It rarely comes from out of nothing. The red mist is a build-up of emotions. Emotions attached to grievances like injustice or a sense of wrong.

A normal mist would cause you to lose some clarity. But the red mist is more than that. It has an anger about it. It says ‘I’m not taking this anymore’. it gathers all the pent-up feelings and channels them into one potent act to banish the thing which is eating away at you.

Preventing the red mist requires Discipline. Preparation. Awareness. Self-knowledge. Knowing what you won’t do under pressure, as much as what you will do. It’s about recognising when you might be vulnerable and fortifying yourself against that vulnerability.

Whatever internal pressures Vahaamahina was experiencing, he wasn’t able to channel those pressures into the French cause. The higher cause than his own. Team first. Self second.

A mantra that got destroyed by the internal enemy of the passionate and the angry. The red mist!