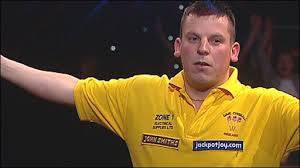 It’s the first round of the World Matchplay at The Winter Gardens, Blackpool. And Dave Chisnall has finally found some form. Unfortunately, he is 9-1 down against Watford’s Mark Walsh.

Chisnall picks off a couple of legs to keep Walsh on his toes, but it’s come too late to turn back the tide. Chisnall is out.

After his semi-final performance in the UK Open at Bolton, many judges expected Chisnall to at least match his performance at The Reebok. After all The Reebok was Chisnall’s first TV event since he joined the PDC.

He appeared fearless and unperturbed by pressure. So where did it all go wrong at Blackpool?

Clearly, one has to take into account the uniqueness of Blackpool as a venue. It’s raging hot on stage for a start, and the Winter Gardens has a special feel that can throw some players off kilter.

But maybe we have to look at Chisnall’s late rally, to understand more about his under-performance. When you see a player start to finally play when a match is all but lost, you can be sure that they have thrown the shackles off, and are playing without fear and inhibition.

So then you have to ask the root cause of that inhibition. Especially in the light of Chisnall’s apparent fearlessness at Bolton.

Maybe the Reebok semi-final journey raised expectations. That Chisnall felt he had to match that fine achievement. That anything else would be a disappointment.

Maybe people around him were building him up to be potential World Matchplay Champion. Filling his uncluttered head with ambition and possibility.

Either way, last night at The Winter Gardens was a personal nightmare for Dave Chisnall. He lost all feel for his game. Expectations cause that. They take you out of the moment, into a place in your head loaded with ideas of what should be happening.

Exprienced players know not to be lured by them. But you have to hit rock-bottom first, to recognise the subtle calling card of expectations and their potential side-effects.

The pain of a heavy TV defeat, should warn Dave Chisnall of their seductive properties.