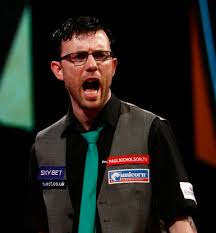 It’s the third round of the World Darts Championships at Alexandra Palace. And Paul Nicholson is simmering. He has just come off stage, having lost 4-1 to Kim Huybrecht’s. And he’s blaming Huybrecht’s girl-friend Dana Verhaegen for his unexpected loss.

Regular big-screen close ups of the pretty Verhaegen, proved a lure for the women-hungry beer swilling crowd. Leading to boisterous wolf-whistles and other shows of approval. This, plus an instinctive dislike of Nicholson’s so called ‘bad-boy’ image, gave the man from Chorley nothing to feed off emotionally.

Of course he’s wrong to pin the blame on the North London crowd. And it will only attract more criticism for him. The fact that he’s aware of the crowd noise, tells you that Nicholson was not as fully focused on the big stage as he should have been. He was not in a bubble of concentration.

But to get into that bubble, it seems as if Nicholson needs to feed off the crowds energy. He needs an emotional connection. Paul Nicholson has set himself up to be different, as his unique way of getting the crowds attention. Getting them focused on him.

And against Huybrecht, Dana got more crowd attention than Paul. They were distracted. And so was he.

Paul Nicholson doesn’t need to change his image. But he needs to understand the vagaries of crowd dynamics, and try to make sure, that he doesnt rely on the crowd to feed his unmet emotional needs.

Perhaps some good will come out of yesterday’s defeat. Causing Nicholson to be more single-minded. Less needy. More ruthless!