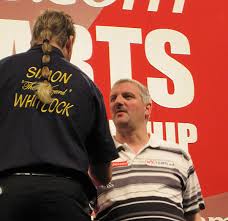 It’s the first round of the World Darts Championships at Alexandra Palace. Former world finalist Simon Whitlock is playing Dennis Smith. And Sky are hyping the game up!

Whitlock has recently broken his ankle. How will he stand the test of a long drawn out game, against the slow-throwing Smith? This is a potential upset in the making.

But Whitlock, instead of being hampered by his injury, is set free. He throws the highest average of the tournament to date, to put Smith to the sword. Sky’s Rod Stubbs, is gurgling with incredulity.

What Stubbs has failed to recognise, is that Whitlock’s injury is anything but a hindrance. With expectations lowered, the Australian has removed the burden of pressure from his shoulders.

He can throw as if there is nothing on the match. Within himself, Whitlock knows that he is far from 100%. As a result, he is relaxed and seemingly just happy to be up there on stage. He stops trying and just throws naturally and instinctively.

Now that he is through to the second round with a 108 three dart average, external expectations will build. But if Whitlock can maintain a happy-go-lucky attitude, where the love of playing is greater than the ‘need’ to win, then who knows what can happen!