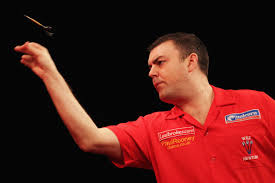 It’s the second round of the World Darts Championships at Alexandra Palace. And the match between Fleetwood’s Wes Newton and Taunton’s Justin Pipe, is hotting up.

At two sets all, Newton is allowing his irritation at Pipe’s slow and deliberate style of play to show. Behind Pipe’s back, Newton is tapping his watch, Alex Ferguson style, to let us know that he is unhappy with the West Countryman’s speed of play.

Then Newton feigns falling asleep, as his simmering frustration gets the better of him. Of course, with these distractions, the world number five’s game suffers, and he crashes out of the tournament.

It’s a match he could have won with something to spare. At two-nil up he held all the aces. But the Fleetwood thrower made a big mistake.

He clearly hadn’t mentally prepared for the special challenge of playing Justin Pipe. Newton is a fast quick player. Pipe isn’t. And Newton cant change the speed Pipe plays at. He has to adjust to it.

That means changing his routine whilst he waits to throw. Slowing himself down and exercising patience. Knowing exactly what to expect and preparing for it.

Newton knows exactly what to expect, but has simply not prepared for it. He has no process to keep his mind engaged whilst he waits to throw. It’s almost as if he is bored!

As a result frustration holds sway. What he is feeling on the inside, reveals itself on the outside. Perhaps with it being the World Championships, Newton is simply too fired up. His internal speeds are just too fast for a game against Justin Pipe.

Wes Newton may have the talent to win a World Championships. But he doesn’t yet have the mentality. For the mentality of a champion, allows you to find strategies to win against difficult or awkward opponents.

In years to come, perhaps Newton will be thankful for the lessons that defeat against Justin Pipe taught him. But for now, he has to live with the uncomfortable feeling, that with a World Title to fight for, he let undeveloped emotions get the better of him.