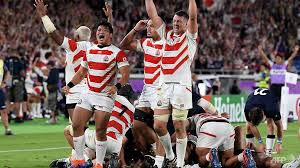 It began with an emotive national anthem. Always an early sign of the potential for a special performance. And then it continued with a blistering first half display that blew Scotland away.

It ended with Japan qualifying for their first ever World Cup quarter-final. And with many critics opining that it was the best World Cup match they had ever seen.

That was possibly because, Japan were playing for more than themselves. The typhoon which caused havoc the days prior to the Scotland match, gave the Japanese team a powerful focus for their emotions. A reason to succeed beyond themselves.

It’s akin to saying, ‘The people of Japan are hurting. We care about them. We are one and the same. We now channel that care into the rugby. This is our gift to the people’.

This works because you then do not want to let those same people down, having committed to play for them. It means you find extra energy when you are near exhaustion. You find extra desire and will when under the greatest pressure. You will not be the one to fall short.